Epping Forest is a Mecca for London cyclists and an area where access to the ‘people’s forest’ is seen as a birth-right. Well, it is now, but only after a fight. At the end of the 19th Century Epping Forest like other common lands, forests or heaths was in danger of being swallowed by London’s growth and subsequently landowners tried to cash in. The fight was on. 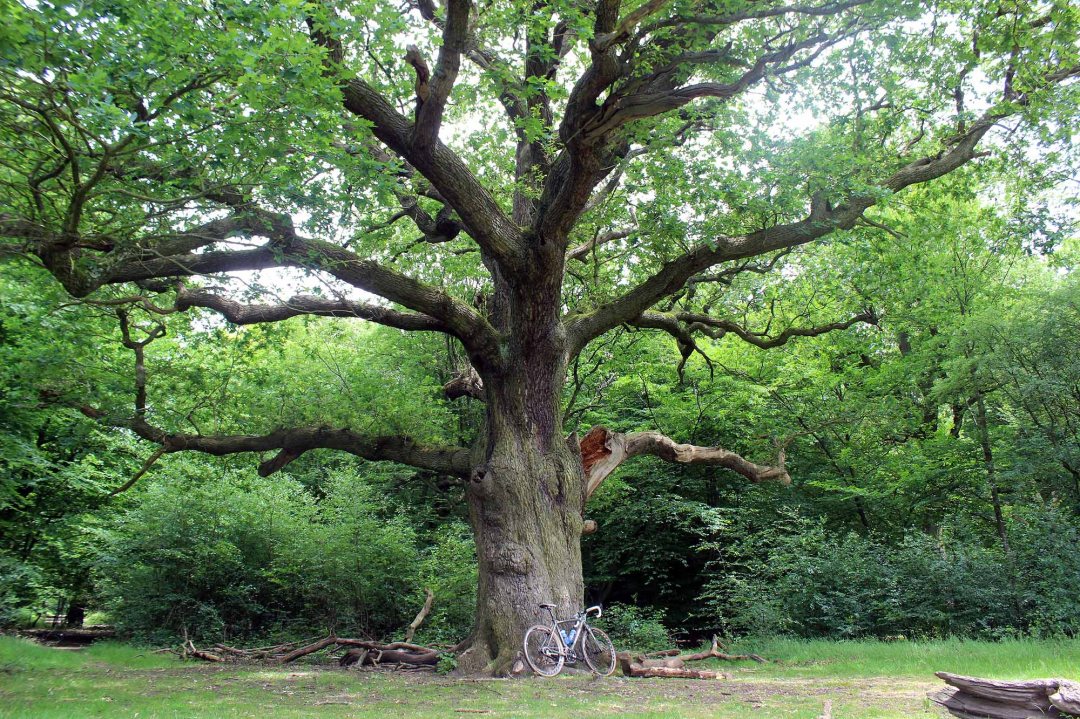 Sprawl
The industrial Revolution in Britain saw the rapid growth of the urban sprawl as landowners sold to developers to build homes and factories (many velodromes were lost at this time), so when landowners tried to sell off common land there was resistance. Issues of ownership were fought in the courts often having to refer back to ancient and arcane rights of ownership and commoners’ rights to graze livestock, gather wood in forests and access. Those landowners who claimed rights of ownership from ancient privileges began to enforce this by denying access i.e. taking steps to enclose areas such as Epping Forest, Wimbledon Common, Wandsworth, Blackheath and Hampstead Heath.

A decision in 1871 became a landmark moment in the common land debate when an attempt by Lord Spencer to enclose Wimbledon in 1864 by a private Act of Parliament was lost after a public enquiry and an energetic campaign against it had been staged.

Hainault Forest near Epping had been almost cleared after an act of parliament in 1851 had decided it as waste land and suitable for development, in response one of the first environment groups was formed to fight the complete loss of the forest, they successfully fought to save it and in 1906 it came into public ownership. I and others ran the Beastway Mountain Bike Series there for a few years and I can remember setting up the course in the ancient forest and being very aware on windy days of the potential for falling timber!

‘My Lud’
A number of high profile court cases thrashed out the claims of the owners against the commoners’ rights of access. Subsequently many injunctions were successful in stopping enclosure (such as Wimbledon).  Simultaneously the issue had reached the House of Commons and in a series of Metropolitan Commons Acts from the 1850’s to the 1870’s the Metropolitan Board (later to become the London County Council in 1889) was given the right to acquire and hold common rights. The 1876 act read “The Metropolitan Board of Works shall, in respect of any common situate within the metropolis as defined by the Metropolis Management Act, 1855, have the same power to purchase and hold, with a view to prevent the extinction of the rights of common, any saleable rights in common, or any tenement of a commoner having annexed thereto rights of common, as is conferred by the fifth paragraph of the eighth section of the Commons Act, 1876, upon an urban sanitary authority in respect of a suburban common.”

Although the owners of common land would try unsuccessfully to demand a high price, nonetheless Epping Forest, Wimbledon Common, Wandsworth, Blackheath, Hampstead Heath and many others (Inc. Clapham) all came into public ownership as did Box Hill (although by private means). Many of those who fought for this were also involved in the creation of the National Trust. 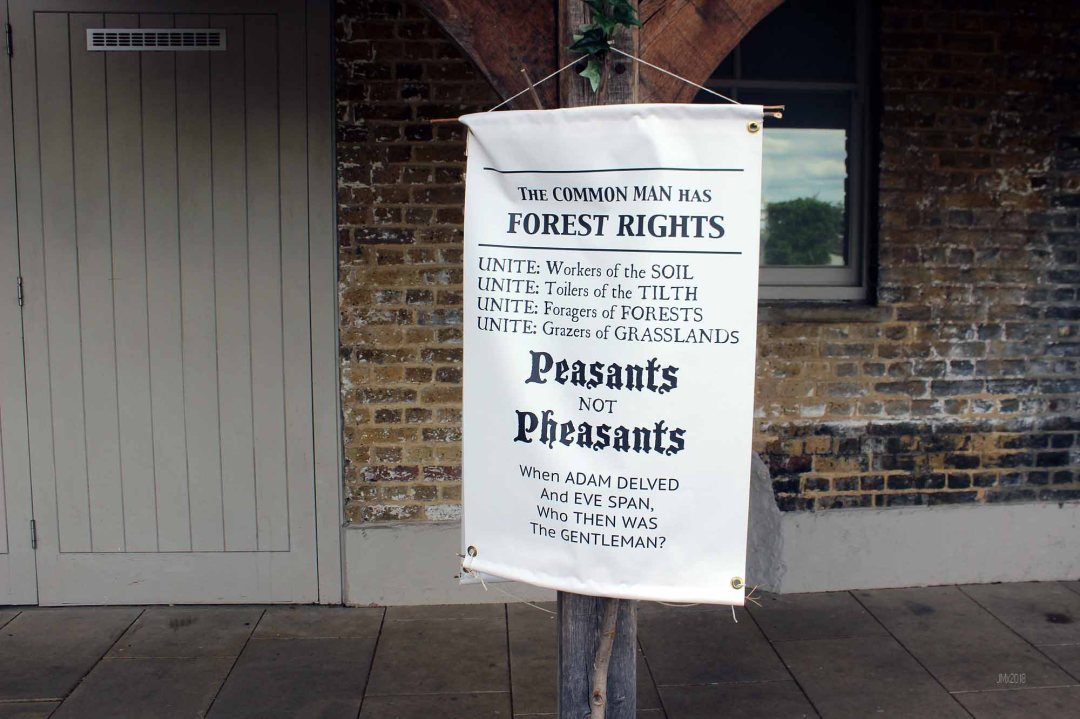 Epping Forest
In 1878 the Epping Forest Act became law, and the land, including Crown Lands, was placed in the care of the City of London Corporation mandated to “….at all times keep Epping Forest unenclosed and unbuilt on as an open space for the recreation and enjoyment of the people”.

In 1882 Queen Victoria at Chingford dedicated the forest to the people and it became known as “The People’s Forest”. Epping Forest covers about 5,900 acres and is some 19 kilometres long north to south, and only four kilometres at its widest point east to west. 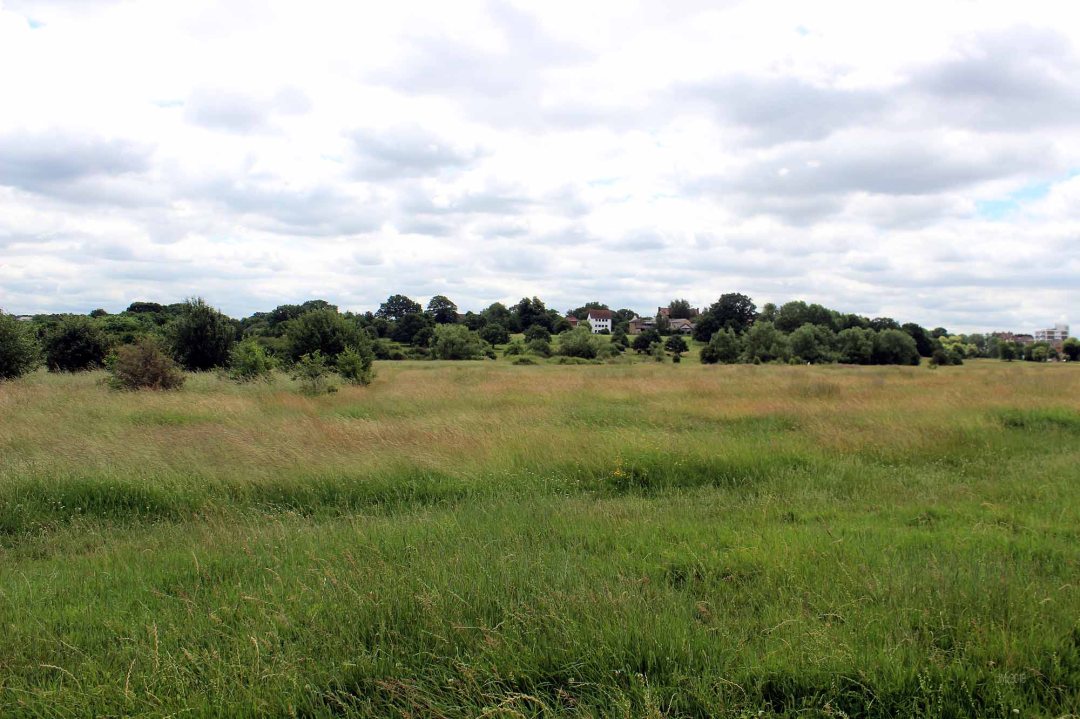 Elizabeth the First’s hunting lodge in the distance near Chingford, Queen Victoria came here and opened the forest for the people

Open Access – Common bikes
Every step you take or every pedal stroke you make at Epping Forest and on other common land is because people organised against land owners and developers. So don’t be so quick to ignore if someone asks you to think about a planning issue.

Cycling on common land has caveats and we are not allowed free access across most, whilst in Epping apart from specific sites which are scientifically or archaeologically sensitive, we are free to roam and that is why it is so popular with Londoners.

Chingford less than 30 minutes
London and the surrounding area has the benefit of having a myriad of train lines, nor is Epping Forest a huge distance to cycle to. To avoid the London traffic you can catch the train from Liverpool St (25 minutes to Chingford) or the Central Line (at Stratford and stations after).

Riding in the forest
Epping Forest is narrow and not too long either, if you are a local you can learn the main tracks and how you can connect them via myriads of single track. If like me you are Epping rusty you can navigate by working out where the sun is and riding either north or south and thus avoid endlessly tripping up over the many roads that cross the forest. The roads becomes more of a problem nearer High Beach in the northern half of the forest as they come together at junctions and a roundabout there.

These roads can become frustrating although I found my angst lessened by riding the long winding gravel tracks and the abandoned asphalt of the old Epping Road that allow you to flow and feel free, thank goodness people stood up and fought for common rights in the late 1800’s.

Landowners tried to enclose this land 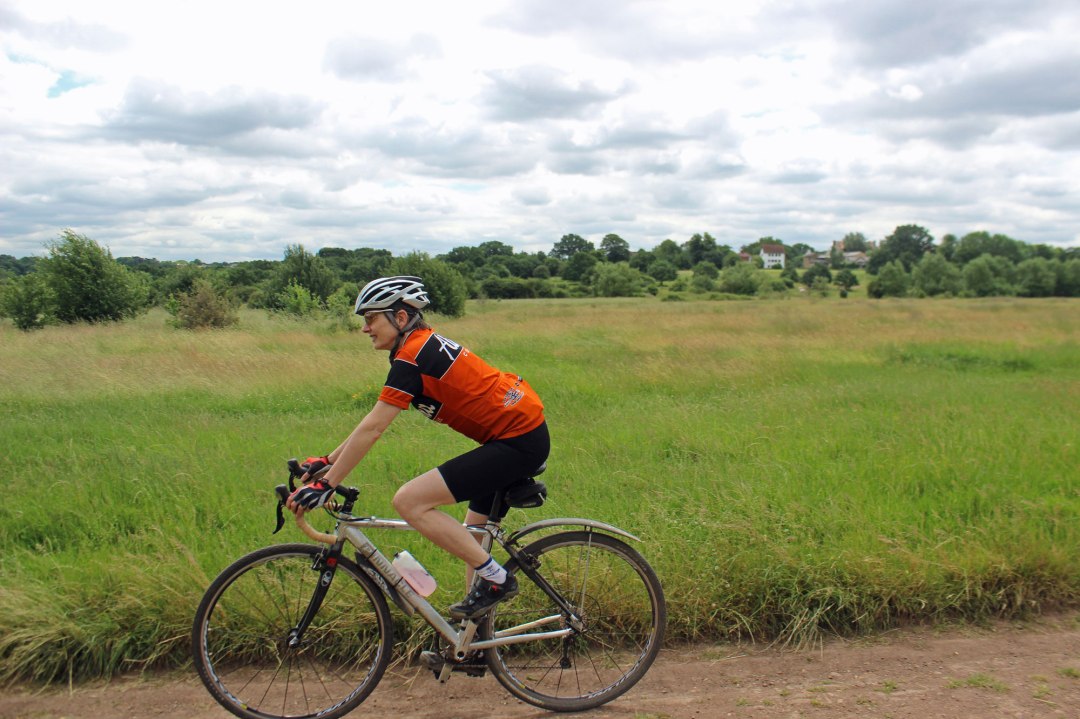 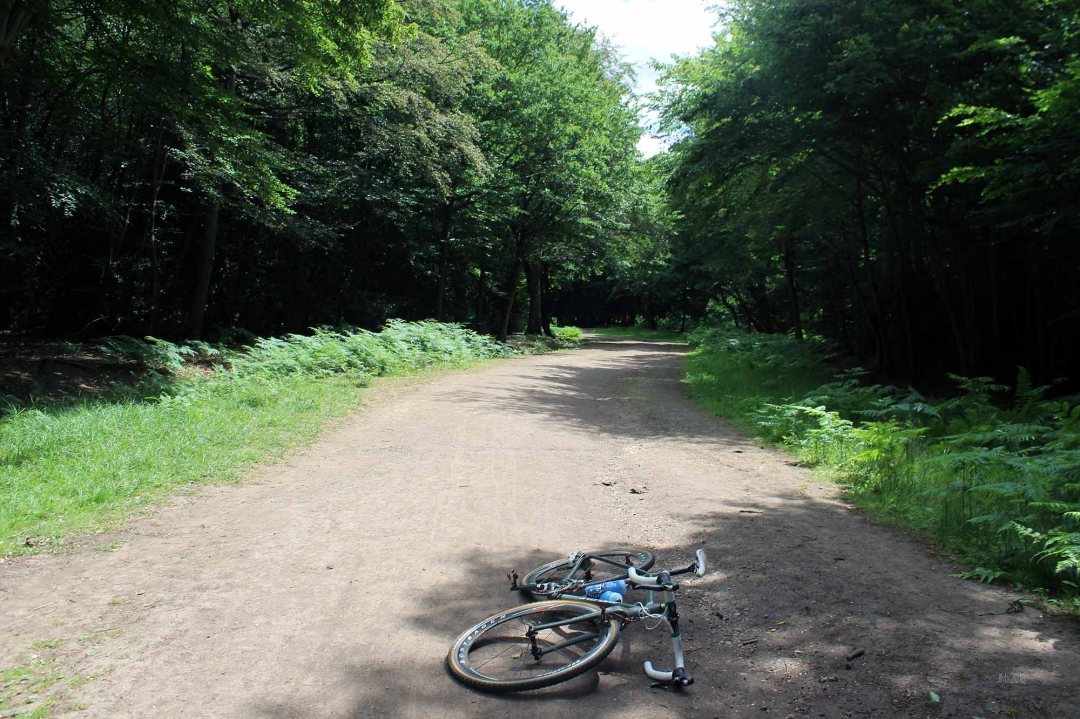 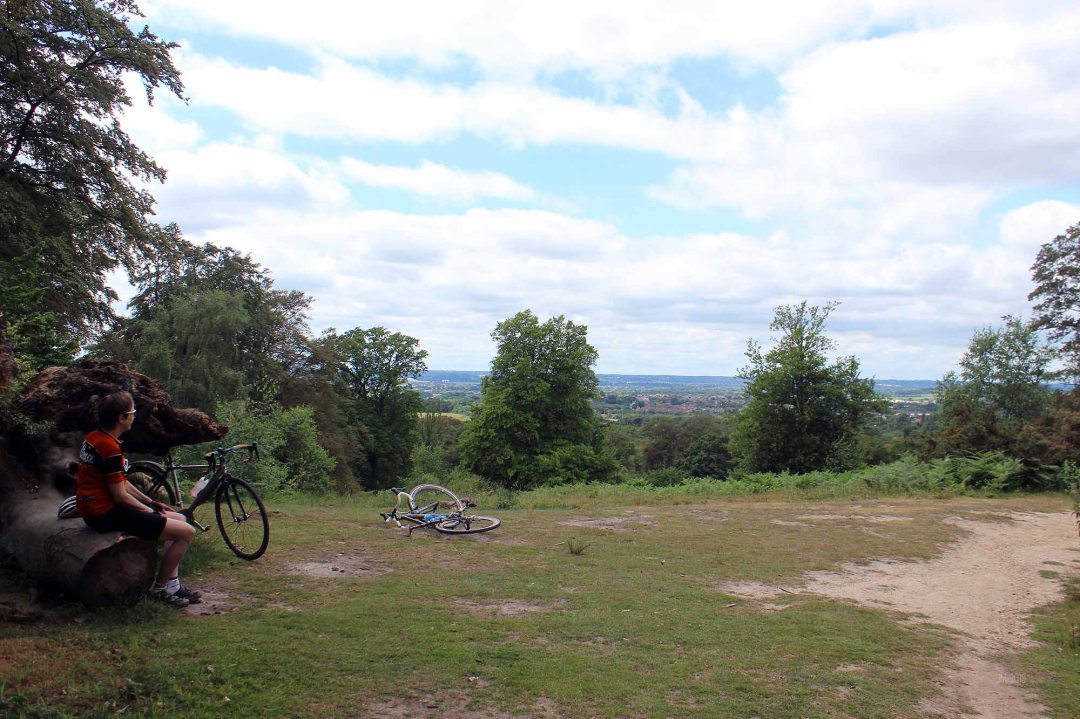 The view west from near High Beach

Henry the 8th built it but never used it, he became too ‘large’ to climb the stairs. The middle floor was open and allowed hunters to fire arrows at deer etc. 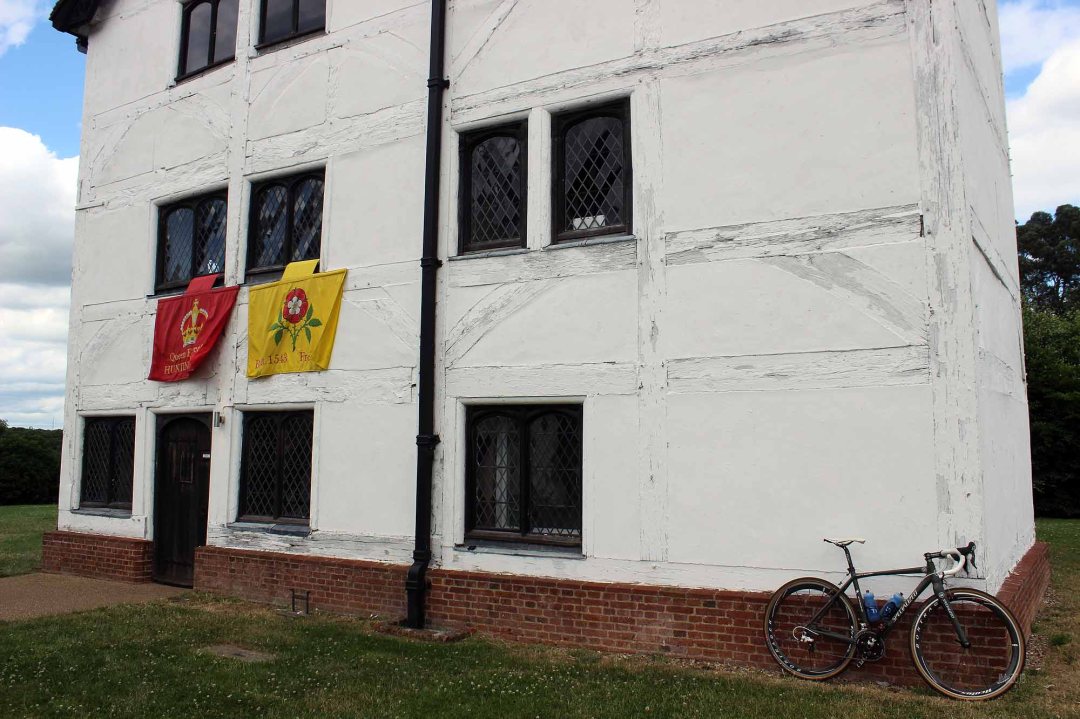 Queen Elizabeth also never used it although she nearly did but stayed in Wanstead instead. 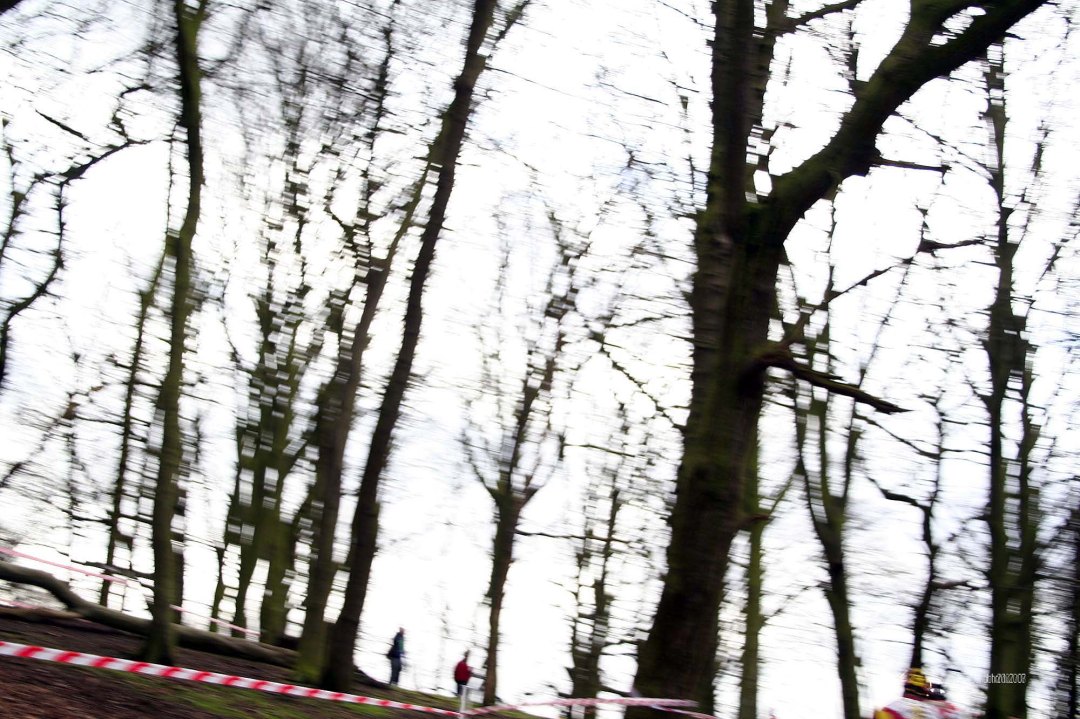