Murals have a long history of presenting a narrative, a sentiment, a joke or simply a nice artwork. They are the embodiment of art in a public space. Thomas Hart Benton and Diego Rivera reflected the narratives of US and Mexican history respectively along with many others by creating epic art works that few people could bypass without taking a look. Murals can also subvert the awful as I recall from viewing the Berlin Wall.

London has a rich body of work; probably the most famous is the vivid and colourful ‘Battle of Cable Street’ situated in East London, a mural that is charged with political and historical symbolism. South West London and the Brixton area in particular have a large number of murals which can be happily toured by bike, as I did. You can combine a look at the two murals in Bellefields Road with a visit to David Bowie’s birth place at nearby 40 Stansfield Road, SW9 or enjoy the skateboard action at Brixton Beach.

For me a mural should be good art, have a good narrative, be vivid and colourful and many a building or area has been enlivened from being dreary by one and additionally a good story told or a statement made.

I began my ride in Battersea (Pink Floyd fans will know of it) through the often anonymous suburbs, but which contain many a gem, onward via Brixton, Stockwell and ending at Lambeth Walk.

A mural with a strong narrative depicting the Battersea area from the air – featured is Battersea Park with its Peace Pagoda, Battersea Power Station and the River Thames.

Many locals are including such as  suffragette Charlotte Despard (a nearby street is named after her), John Burns the first MP with African descent, Shapurji Saklatvala the Communist MP for Battersea North in 1922, the first woman pilot Hilda Hewlett and Alf Dubbs who was MP for Battersea up to 1987. A painting by Evelyn de Morgan’s a Pre-Raphaelite artist is referenced at the top.

Lost industries and an association with aircraft are depicted including the Avro Company and Short Brothers, plus there are balloons.

Adam and Eve are set in a Kew Gardens ‘hot house’. When new it was a colourful expression of life – now it is in decay and a handy metaphor? 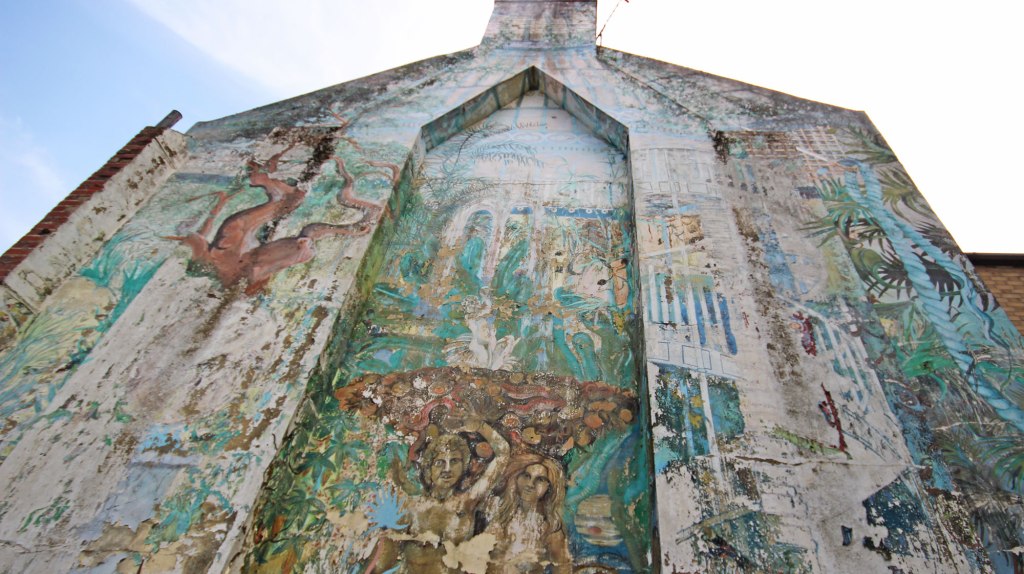 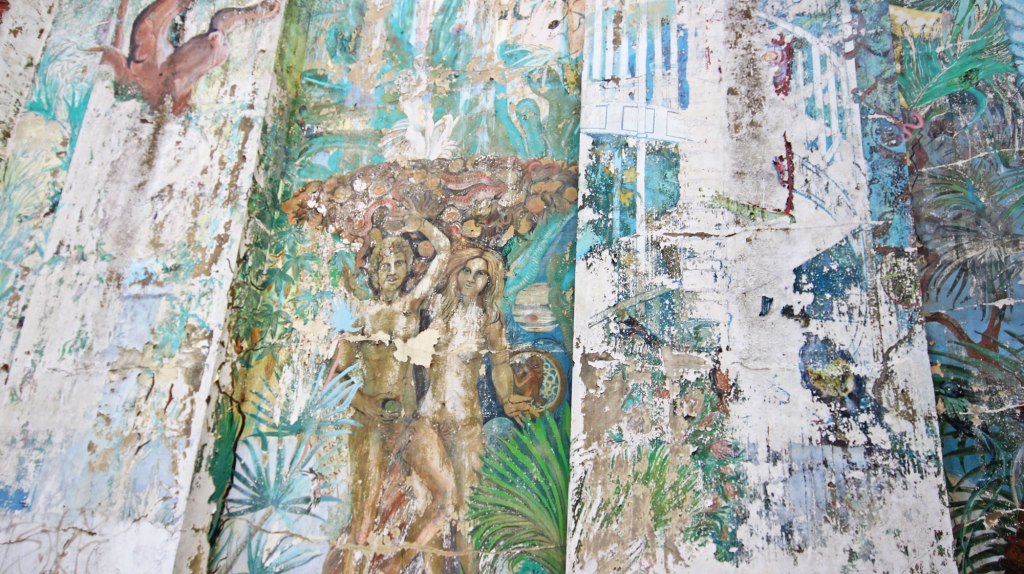 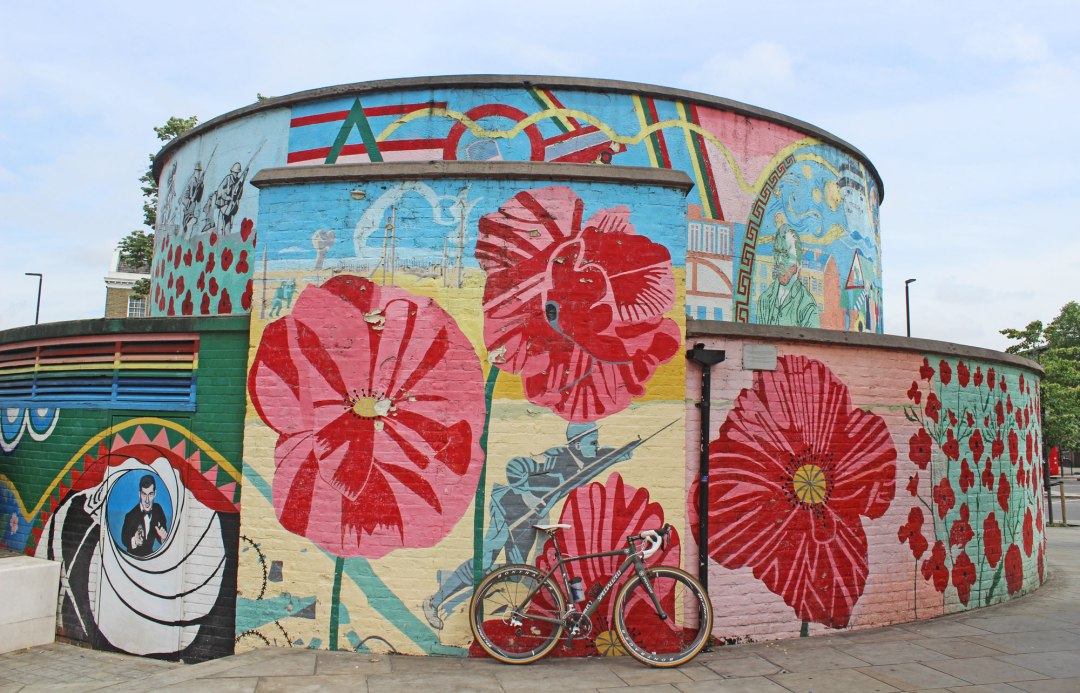 Set on a now becalmed roundabout (flanked by the Cycle Superhighway CS5) and painted on a deep level WW2 air raid shelter this mural refers to Stockwell War dead (Flanders poppies), Vincent Van Gogh (lived nearby), the MV Windrush as many of those who landed in Britain on this ship were temporarily housed in this bunker, Roger Moore (a local man and of course James Bond) and Violette Szabo who at 23 years of age was executed at Ravensbrück women’s concentration camp in Germany. Violette had been betrayed in France whilst working with the French Resistance and died with a number of SOE women who had refused to talk under torture. Tell that to any idiot misogynist as I once did . 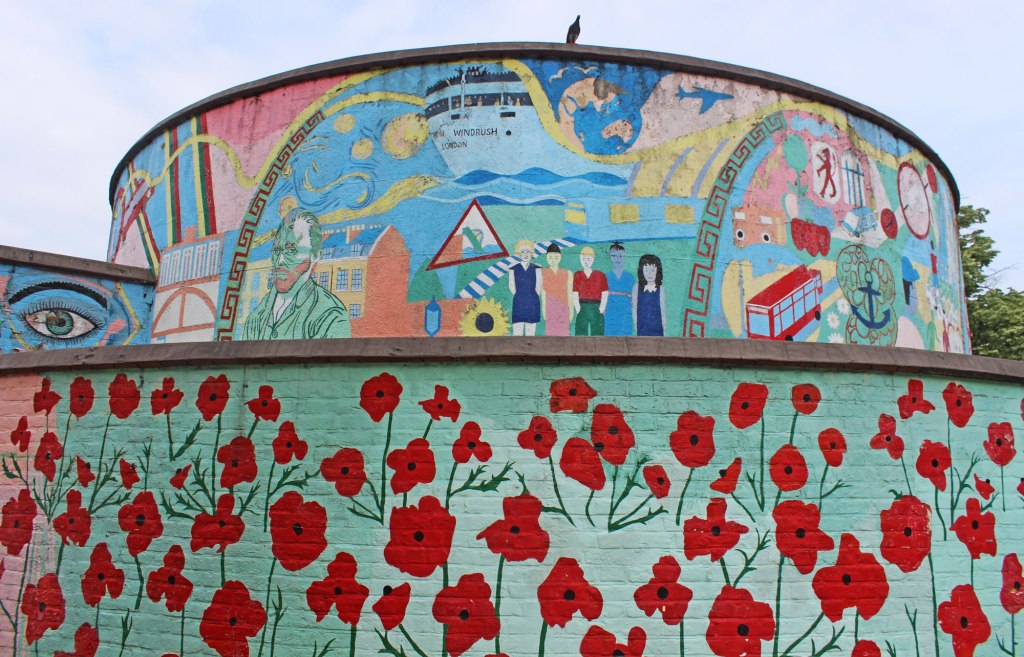 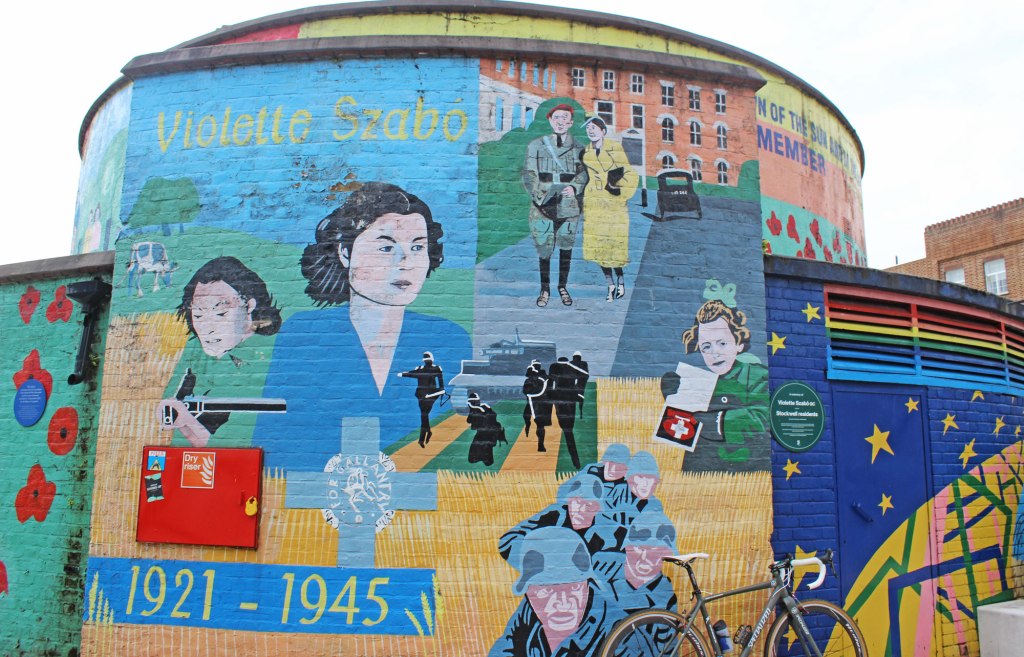 A wonderful look back of children at play in the 1980’s and features many people associated with the playground. Slade Gardens in Stockwell was a gift to the community  by Felix Slade (1788–1868) who also supported the famous Slade School of Fine Art in London.

The playground sits on a World War Two V1 Vengeance weapon site and the mural marks where the line of houses now ends.

Although the mural has faded, is obscured by trees and is damaged by the elements, in particular the golden fair ground writing, there is a plan in place to refurbish the playground and this will include either a new mural or a repair to this one. 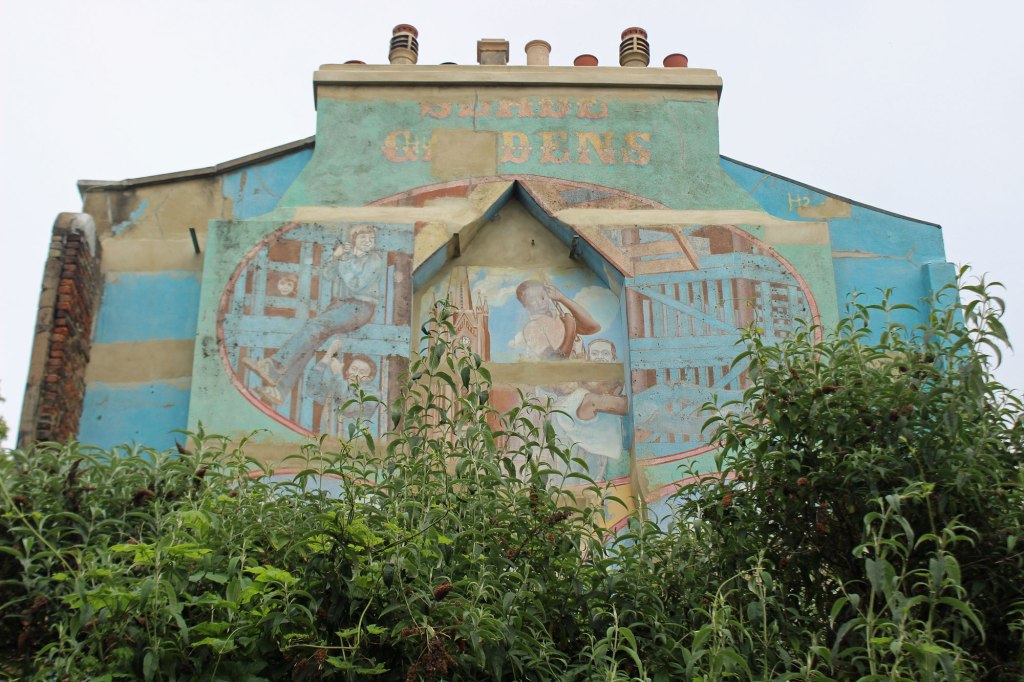 This is an amazing mural featuring a 1948 Olympic participant, the now underground River Effra powering a water mill and a place to have a splish-splash. Also featured is Doulton Pottery and it is a reminder of Brixton’s pre-industrial and pre-urban life. 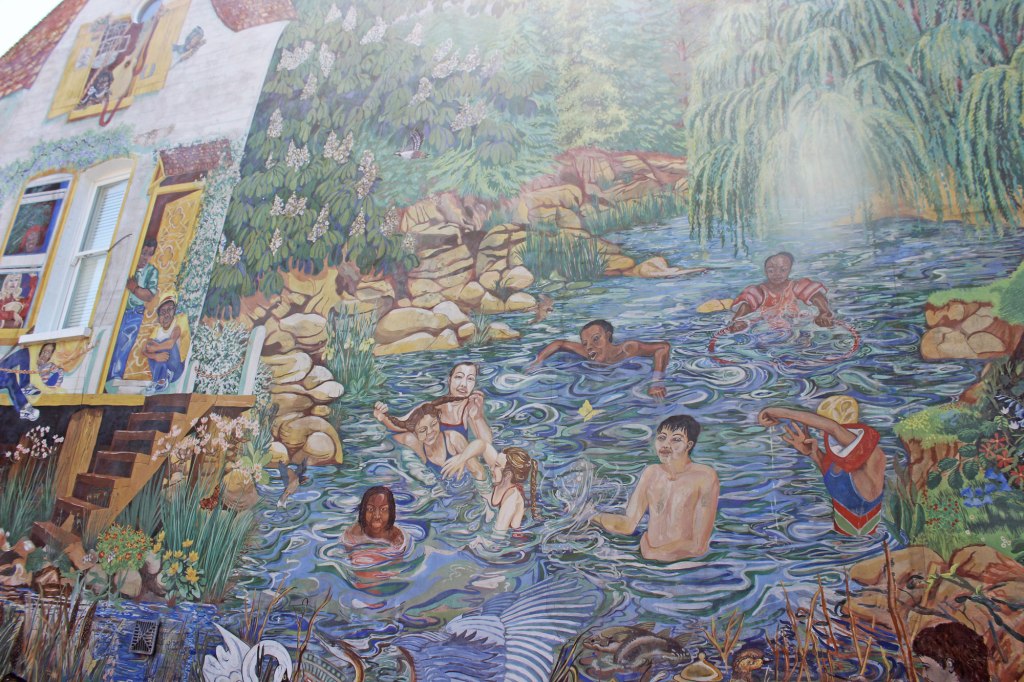 Sadly now looking worse for wear and scarred by rendering repairs this mural was designed in conjunction with Brixton residents; it represents many aspects of the then area as well as showing the lost Empress Theatre. It’s a bit surreal in places but it is rooted in known sights.

The bottom section has suffered from vandalism and a picture of a soldier has been added in more recent years. 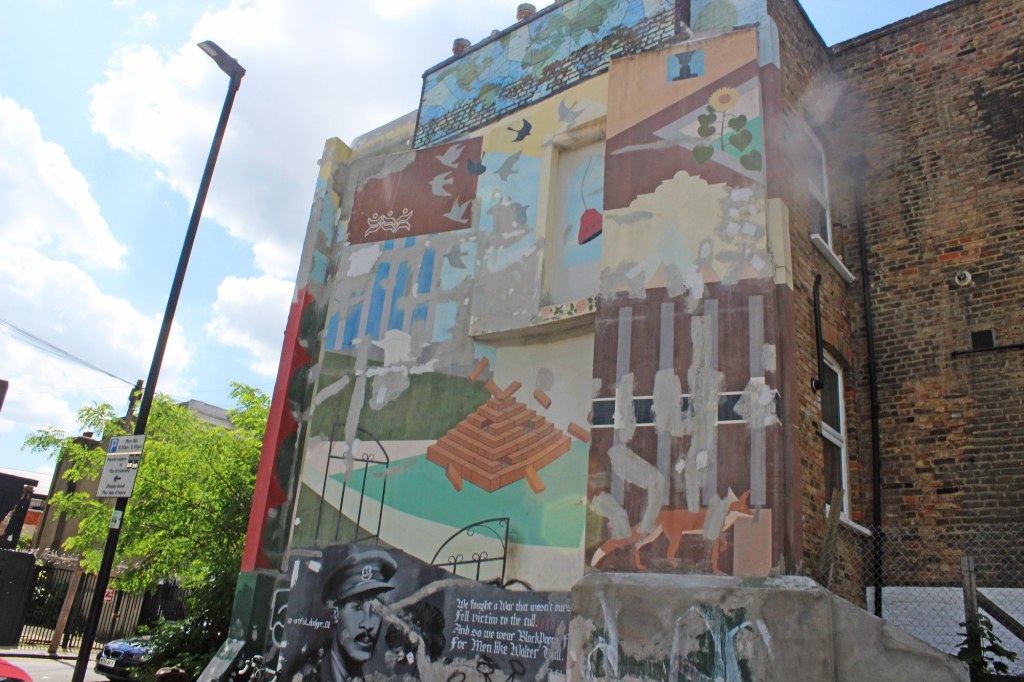 The second of two murals in Bellefields Road and this one has the theme of an abstract beach and sunset, a surreal theme shared with its companion piece, ‘Brixton Mural’. There are sea birds, waves, fluffy white clouds and a winged dog.

It has a few nasty tags but otherwise it’s in much better condition than its sibling, I had often seen this mural from the top of the number 2 bus and it would make me smile. 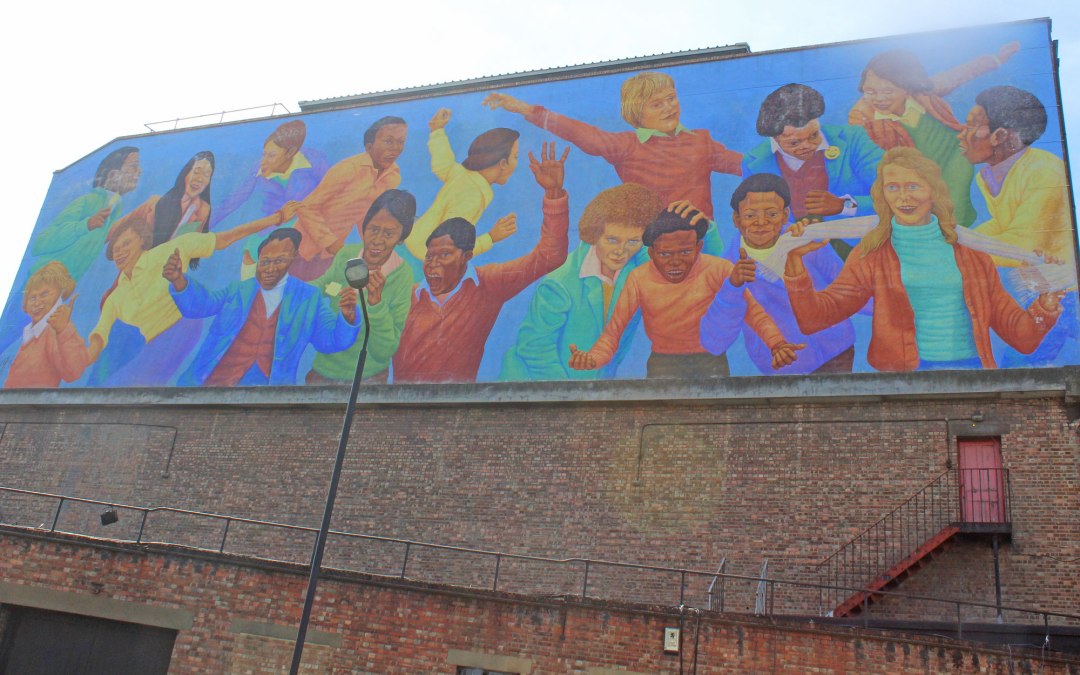 The intention had been to depict the Brixton riot on this site set high on the O2 Brixton Academy, but instead a scene of local children at play was made.

When Brixton Station was refurbished in 1986 two murals were created and bronze statues positioned on the station platform.

On the stairs leading to the south bound platform is this mural, Brixton Food depicting the vegetables, fruit, meat and fish, a wee bit of crockery all on offer in the adjacent Brixton Market at that time.

Shame about the tag but I sort of like the no loitering sign which means you don’t have much time to study this great art work.

In addition to Brixton Food (above) this second mural shows the wonderful diversity of goods on sale in the market in the 1980’s. 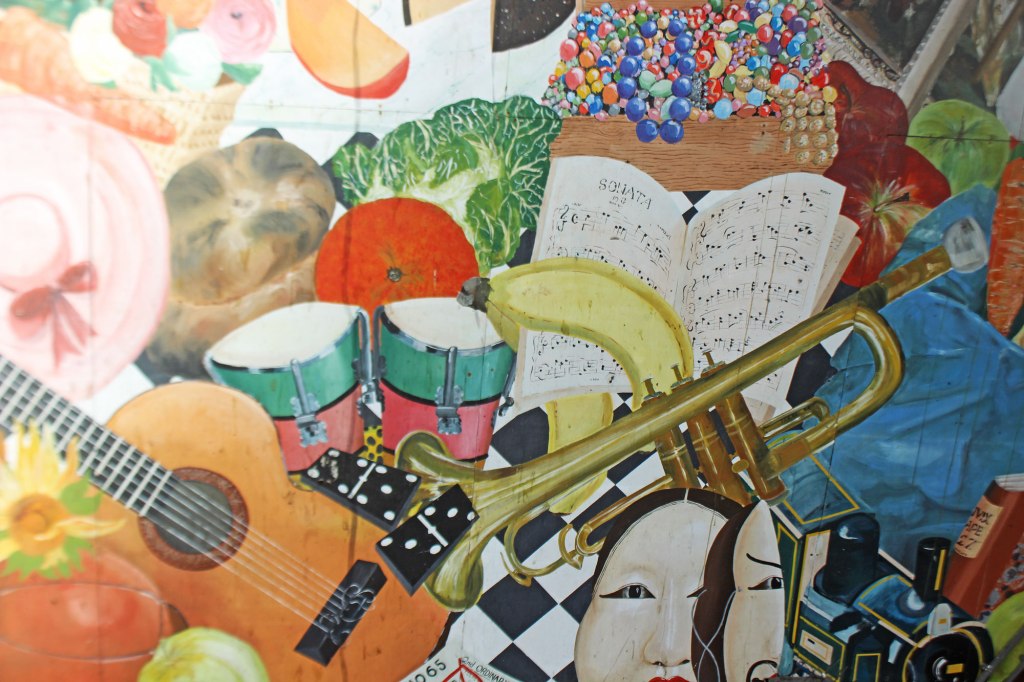 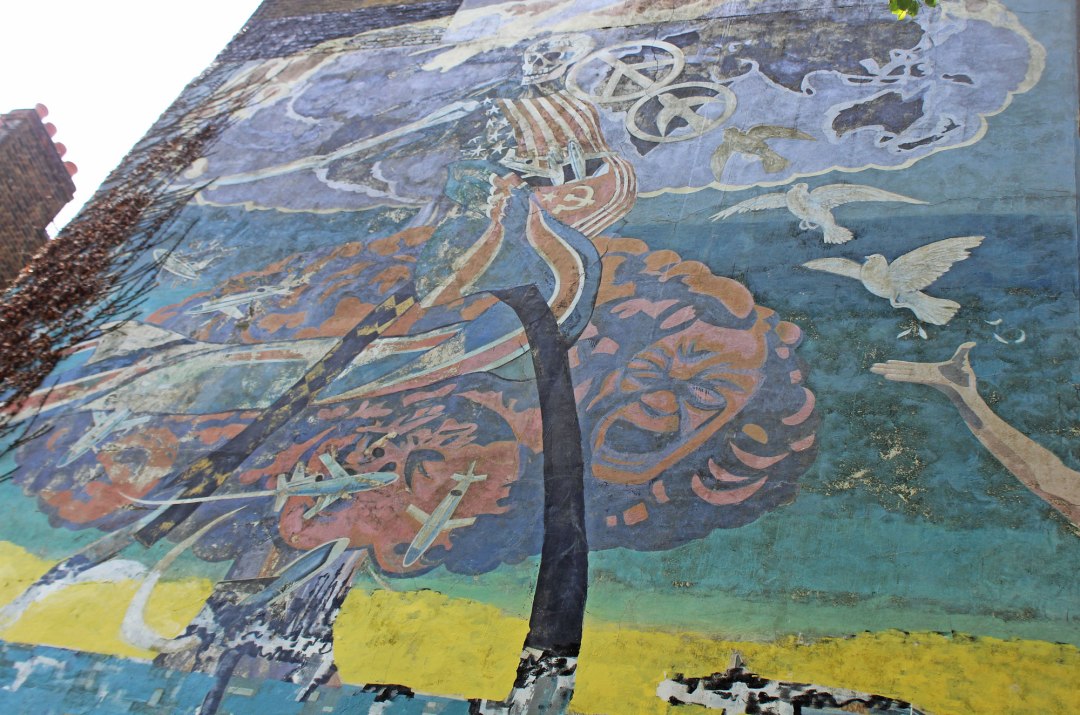 With the Cold War ongoing in the 1980’s this mural was created to show how some would survive deep in their bunkers having led us to the brink whilst the rest of us would have to accept our fate.

This was one of the first London murals I saw when I came to London and then it was vivid with colour and full of details, now it is faded and has been vandalised to such a point that most of it is a blur of paint and not the sharp portrayal of nuclear war being fought over London it once was. 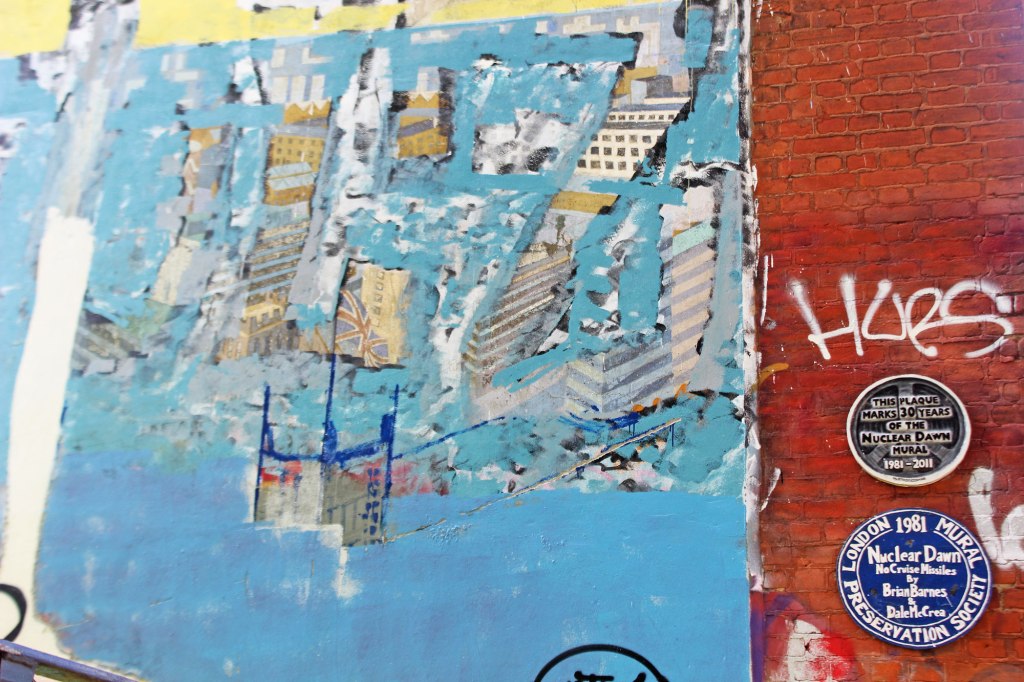 Celebrating the Brixton Windmill this mural has been refurbished in recent times and is different to the one first painted in 1983 although it follows the same design theme. It shows the windmill set in a rural landscape before it succumbed to urbanisation. I like the addition of an image of a modern bike being fixed.

The wall tells the story of the Brixton Windmill that opened from 1816 until the 1930’s and was an important part of the area’s pre-industrial as well as being part of the industrial revolution that transformed London and Britain as a whole. 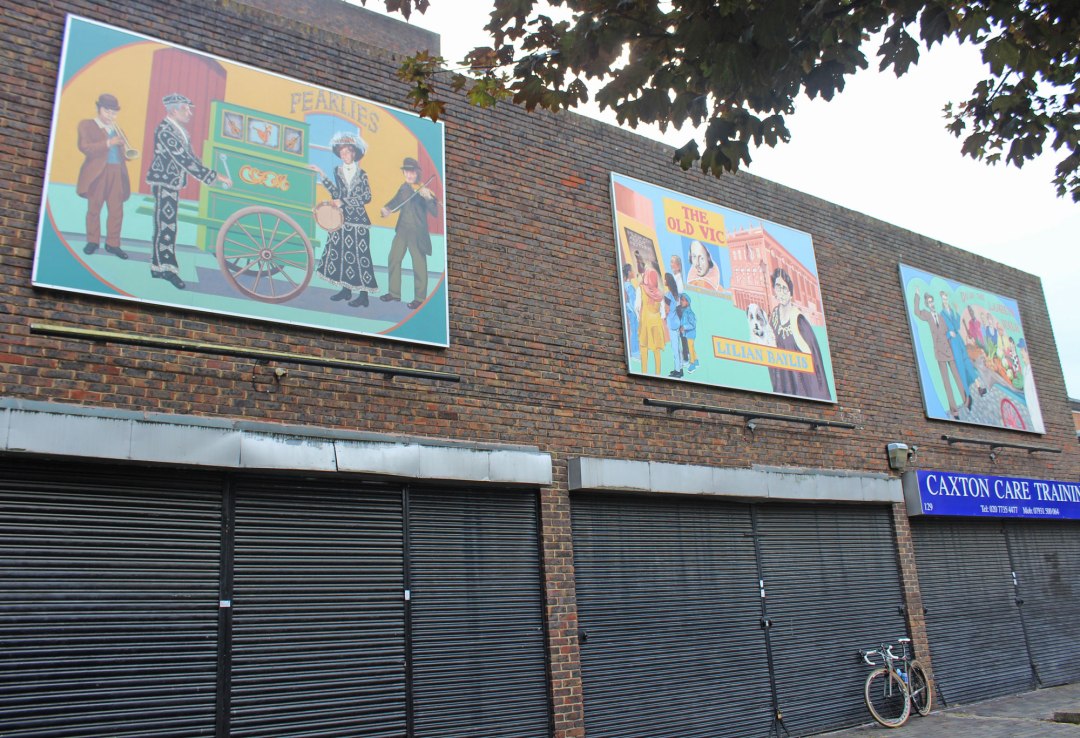 Once a lively place, so lively they wrote a song about Lambeth Walk but now thanks to poor architecture and planning the area lacks life. Five wooden boards depict ‘Doing the Lambeth Walk’ song, the Old Vic Theatre, theatrical producer and manager Lillian Bayliss, the Ragged School and the Doulton Pottery Works all being local to the area (further up the street the post World War Two film Passport to Pimlico was made on a V1 and Blitz bomb site). 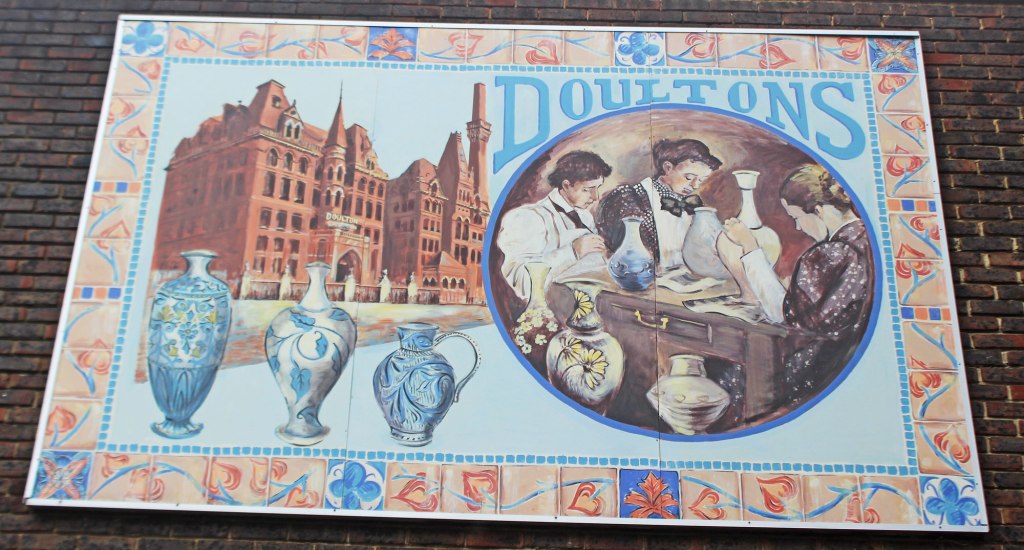 Plus
Many murals have been lost, painted over or removed for development and we should mourn the loss of the artwork in Mauleverer Road and so many others. The popularity of the ‘Angel of the North’ statue shows that public art (including Peter Laszlo Peri’s freezes) can have an enduring appeal and maybe the often overlooked mural may one day make a comeback.

Here are a few more bits of street art that work and I don’t mean mindless repetitive tagging.

Brixton Beach or Stockwell Sands – Stockwell Skateboard Park in Brixton. (the tagging here is in context)

GKS Public Art Project in Glenelg Road, nearby is the Brixton Splash mural. 2005. 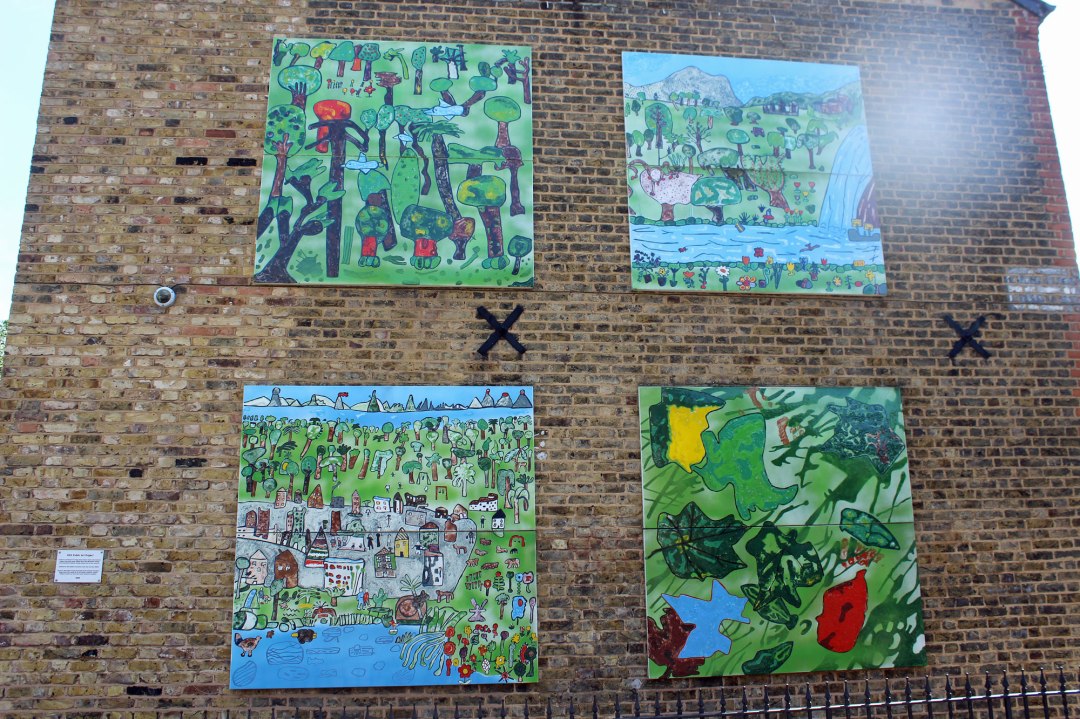 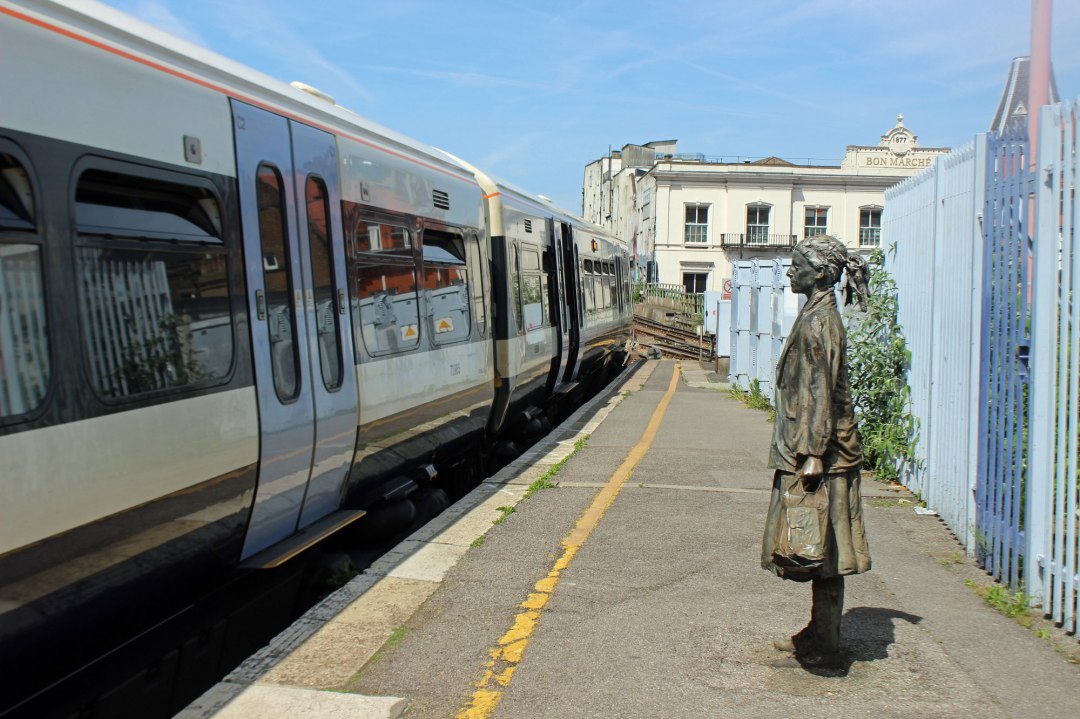 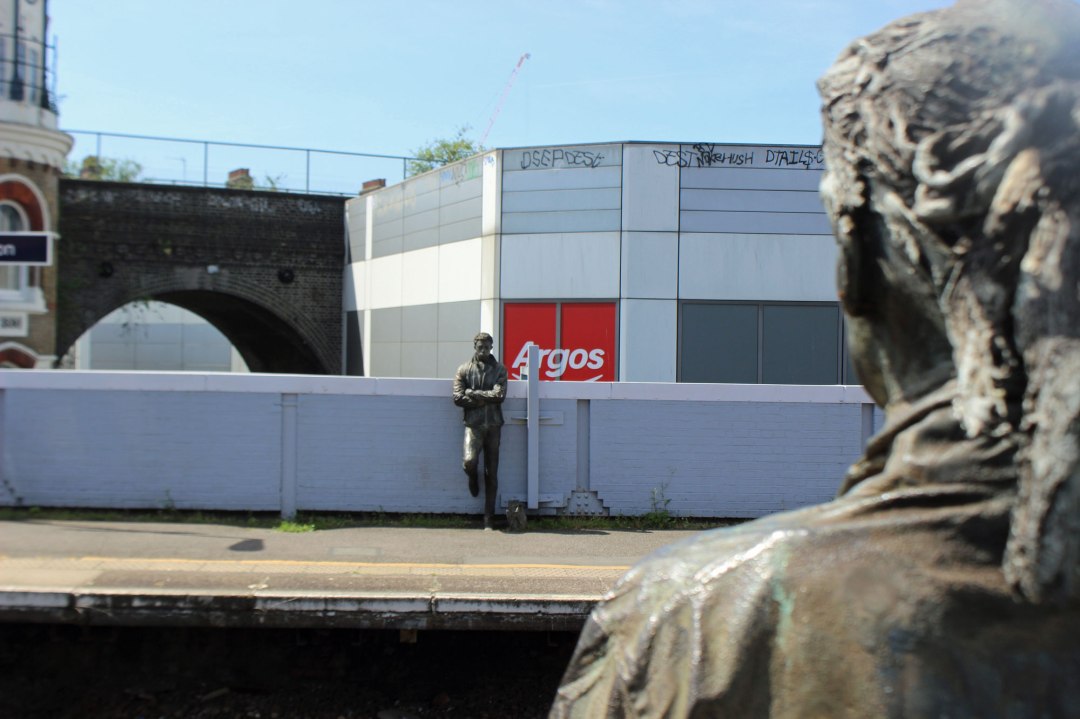 David Bowie was born just around the corner at 40 Stansfield Road – not my cup of tea as a mural. 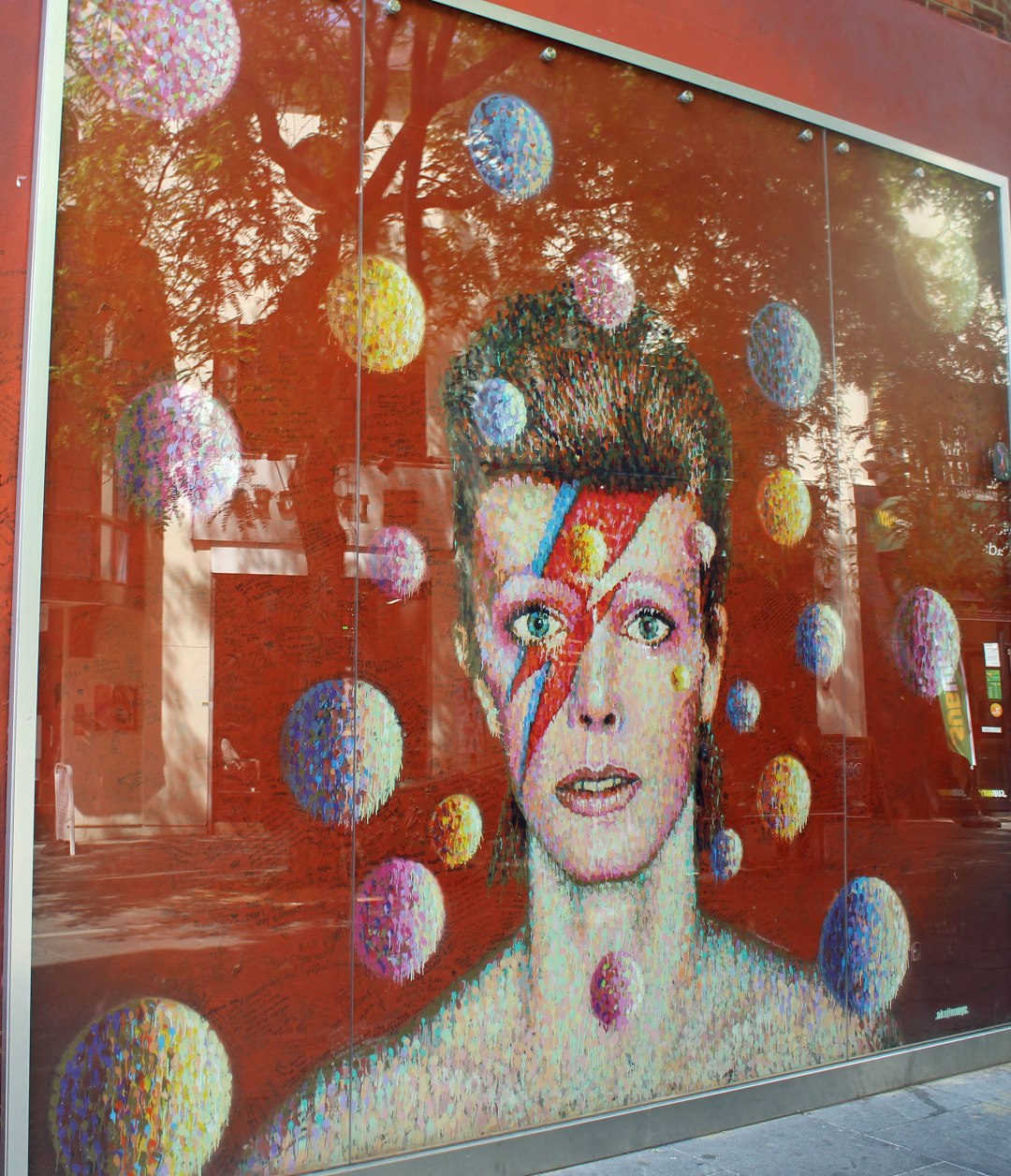 There are many other artworks I could show but I had to stop at some point – maybe I will check out the murals in north and south east London at some point or do a ‘good’ graffiti feature?