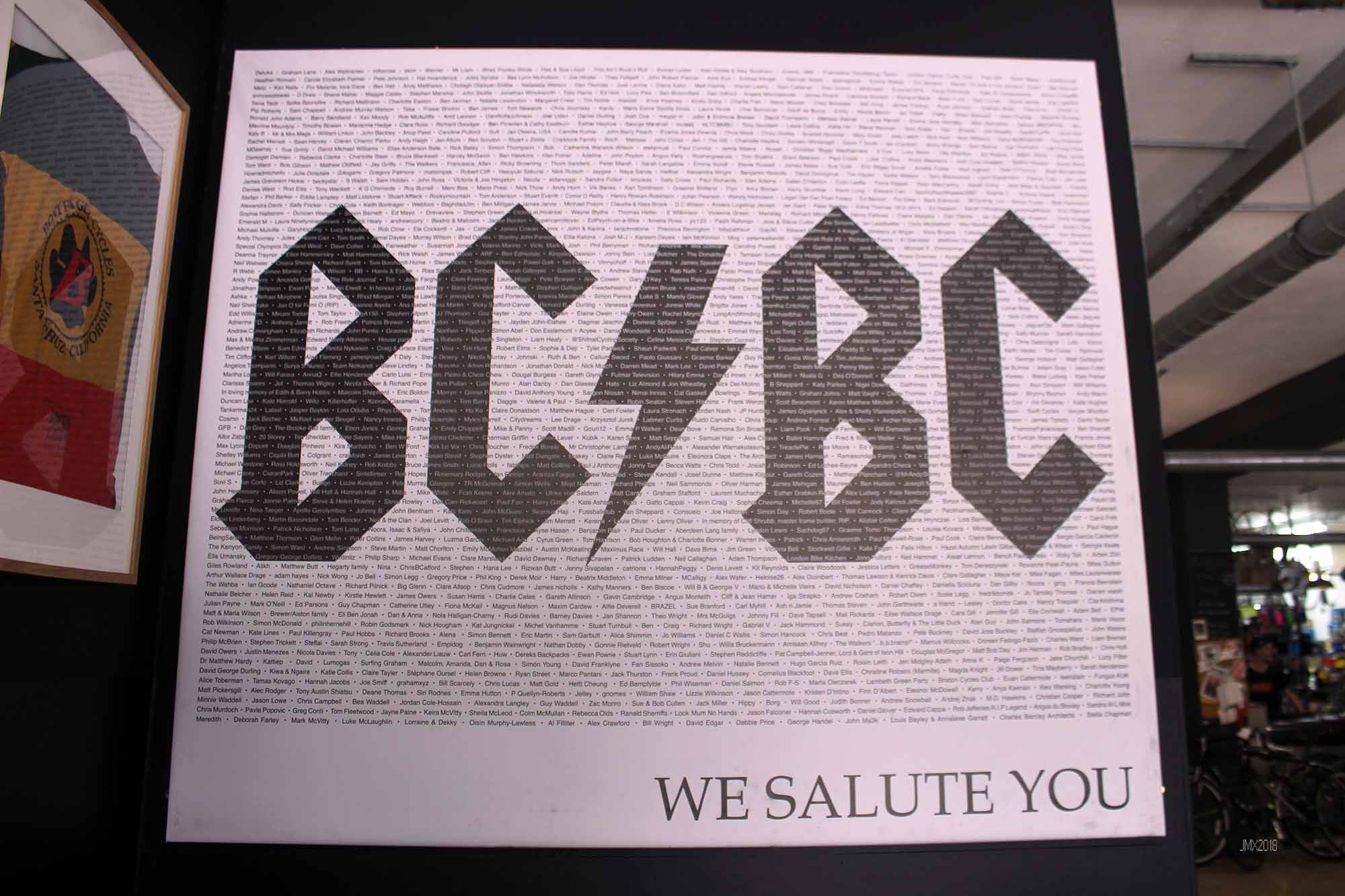 When I first came to London there were two cycle co-operatives trading, one was Mosquito Bikes and the other Brixton Cycles, whilst Mosquito forsake being a co-op in favour of a partnership many years ago and is now part of the Velorution chain, Brixton Cycles remains.

Despite being in the south of London Brixton Cycles sponsored the Beastway MTB series for 19 years north of the Thames such was their commitment to contributing to the London cycling community. In fact many co-ops become a hub for communities. Recently Brixton Cycles had to relocate because of re-development of their shop site and hundreds of supporters helped by crowd funding the move (see top picture).

The Co-operative movement is one of the unsung heroic ventures of Britain as well as the World (UNESCO say that they are an ‘Intangible Cultural Heritage of Humanity’). In a nutshell co-operatives bring together people with a common purpose to work for the benefit of their members plus customers and to be pretty cool about it.

Strength in numbers
Many early co-operatives were formed by people and communities to help keep each other from want and provide a margin of control over their lives by combining their buying power and solidarity especially in the days of Victorian laissez faire and often exploitative business practices. Some things seem to never change.

Although the co-operative movement can be traced back to the 15th Century (Shore Porters Society in Aberdeen) and the 18th (Fenwick, East Ayrshire – selling bulk bought oatmeal at a discount), and in the 19th hundreds of co-ops were formed. Alas almost all were short lived, but since then, over the years many successful co-op’s have been formed and have flourished, including Brixton Cycles and the co-op I am a member of.

Rochdale Principles
Co-operatives finally found their feet in Britain when in 1844 the ‘Rochdale Society of Equitable Pioneers’; established the ‘Rochdale Principles’. This group of 10 weavers and 20 others met the challenge of the Industrial Revolution and the mechanisation of their craft by coming together and pooling their money to open a store firstly stocking basic goods and then widening it to include tea and tobacco etc. They were able to purchase goods at better prices by combining their buying power and thus were able to pass on the benefits to their members and customers.

In addition credit unions based on co-operative principles developed designed to give their members financial security and to provide non-punitive loans came into being. The first were created in Germany and they soon spread to the USA and across Europe with regional friendly societies, building societies, and mutual savings banks being set up.

‘The Co-op’
Best known to most people in the UK is the Co-operative Group which now covers a wide range of services and goods and was formed over 140 years as societies merged. It offered a ‘Divi’ (dividend) to all members both workers and customers. ‘The Co-op’ as it became known declined in the 1990’s creating doubts about its future and there has been much controversy regarding how the society (especially the banking and insurance arm) has been run in recent time. Nonetheless it still trades.

Despite the recent troubles at ‘The Co-op’ and the issues surrounding it which in turn has offered a negative narrative for some regarding co-ops in general, BUT across modern Britain some 17 million people are members of a co-operative of some sort – I am one of them – and we contribute approximately 34 billion pounds to the economy. Some co-ops are small whilst others can be large, all are different, and they cover a wide spectrum of activities.

My Co-op
My co-operative is a Housing Co-operative formed in Central London some thirty years ago to convert neglected or derelict housing into homes. We bought a number of Victorian workers houses that faced an uncertain future for between 10,000 to 80,000 pounds each. Now these houses are worth almost two million per property but most importantly we rent them out at very low rates, we have strong security and we are our own landlords. In an era where people are being priced out of the housing market whether to buy or rent, my co-op continues to look after the interests of our members rather than seeking a profit. We collectively own housing stock with a value of millions which cannot be offered up to the open market and thus our members are protected from asset strippers and get rich quick schemes.

Each member has a role in the co-operative, and in my years I have had to learn housing law, building regulations, Health and Safety, equal opportunities legislation and how to handle large budgets and builders to name just a few often legally bound requirements of running our ‘business’. My ‘pay’ has been cheap rent (and I mean cheap) and also superior housing quality in design, build quality and repair than most, plus we have security and empowerment.

I have also had to learn patience, determination and a willingness to respond positively to sometimes unbelievable expectations placed upon us. We aren’t able to change the system but we can do the best for our members as well as show an alternative way. Working co-operatively is not the same as working for any other entity, although co-ops can differ greatly a good co-op will see each member accepting responsibility and will place working together for mutual benefit above all else.

Brixton Cycles
Brixton Cycles came together in 1983 and is “worker owned and democratically run. Co-op members have a say in how the business is run” and as Brixton Cycles continue to say – “… don’t ask for the boss: they’re too expensive and not very efficient, fun or necessary, and we don’t have one.”

I have known Lincoln Romain for almost two decades and he is the longest serving co-op member and I met him recently to share many of the same experiences as each other from our time working in our respective co-ops.

Both my co-op and Brixton Cycles were born out of the counter culture that existed in London some thirty years ago. Lincoln says some people see Brixton Cycles as being a “jolly” with a “devil may care” mind-set” but this couldn’t be farther from the truth. “We work within a stringent world and we have to pay VAT, sort out PAYE and observe many regulatory systems”, but it’s a “burden shared” within the co-op he said.

I can echo his view as my co-op also has to make sure that we follow the laws of the land and meet (and or be better than) best practice. Lincoln also says that some people don’t get it (I also echo this) and some members have in the past not been able to handle the responsibility and have shied away from “thinking for themselves” whilst operating co-operatively rather than being instructed via a hierarchical management system.

One good thing about a co-op, as Lincoln pointed out, is that those involved have a “vested interest” to make it work. BC and all co-ops meet regularly to talk through issues such as clashing egos as well as the nitty-gritty of running a business successfully. Co-ops are very much about people and finding a good work-life balance.

I asked Lincoln about the future of BC and the cycle trade, he said that they prefer “to concentrate on the personal ”  and find it more beneficial for all to pass on their knowledge and expertise face to face. ‘We don’t price match” – “we can’t match the big online shops”. And although you can buy own brand merchandise such as shirts etc. via their website they stay clear of being an online shop, simple because it’s not the BC way. The shop also tries to stock niche and unique merchandise. It is tough economic environment at this time, and Lincoln highlights not only the challenge from discounters but also the high cost of maintaining a ‘bricks and mortar’ business with the associated increasingly higher rents and business rates.

Lincoln says that cycle shops are “becoming more specialised” and in my view BC’s strength has been and will continue to be what it has always been – different and is unique as all co-ops are. BC might already have the winning formula that many shops are now striving to attain and so they look good to weather the current economic storm by continuing to stand together.

Lincoln Romain – his love of Campagnolo is legendary

So Cool
Co-operatives are a real alternative to standard economic models and there are many different types and styles from people getting together to buy their local pub or store through the issuing of community shares, combining buying power to buy in bulk and pass on the benefits (buying or selling), combining resources (including labour and capital) to help themselves as well as being able to be of benefit to consumers.

There are also many forms of co-ops and some are not called that – there are management co-ops where members agree a body to work on their behalf, fully mutual coops where all members have an equal share and responsibility, and this include ‘workers’ co-op’s such as Brixton Cycles (and mine). In the latter there are no shareholders or investment bankers to skim of the top of profits, and after paying loans and running costs all money is held by the co-op to do as they wish.

In this mad digital age ‘bricks and mortar’ is still important providing a human touch and co-operatives have the tools to survive because in the end a business benefits from following a humanist approach.

Brixton shirts over time, the list of the many who crowd funded a recent move, my bike safely stored whilst I was in the shop and a drop off point for donations for refugees

Open and airy with cool products on show

Links
Brixton Cycles – http://www.brixtoncycles.co.uk/
How to start a Co-op – https://www.uk.coop/developing-co-ops/start-co-operative